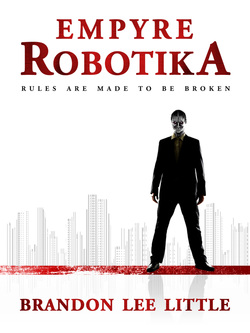 A hotshot young attorney hopes to make a name for himself by being the first to put an android on trial for murder. Instead, he finds himself pulled ever deeper into an underworld of intelligent machines that no one knew existed, his life in danger at every turn. He is joined by a brawn-over-beauty private investigator whose unpredictable style seems likely to either crack the case or get them both killed.

The book is not "young adult" specifically, but it's pretty teen-friendly.

Back story about this title

The interesting thing about this book is that I was right in the middle of writing it when the movie "I, Robot" came out in theaters and really took the wind out of my sails. There are a number of similarities between this book and that movie, to the point that my wife asked if there was a chance my draft could have fallen into the wrong hands. I finished the book (since that was my only objective in writing it) and let it sit on a shelf for several years.

In the meantime, digital printing and e-readers came into their own and I decided it would be better to get it out there and let it live instead of withering on my shelf. So...there you go. As I reread it and got it brushed up for print I felt better about the major differences between my book and the aforementioned film, so that helped reaffirm my decision to publish.

Also funny, is that I described a handheld "EPad" computer years before the iPad. I ended up changing the device's name because time caught up with my story. I think I'm just barely ahead of a curve on a lot of things, so it taught me to to not delay so much.
Powered by