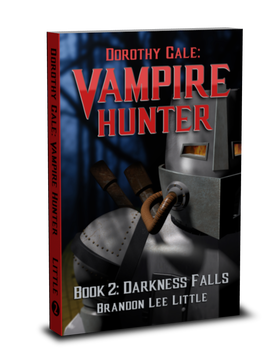 Oz has been dark of late.

Dorothy's dreams of reaching the Emerald City have come crashing down around her. Rather than being all she'd hoped for, she finds a city steeped in corruption and in denial about the world outside their walls. Now, the entire city is in mortal danger from a new threat and only she has the power to stop it.

Pursued by thieves and with a mob of vampires on her heels, her plans quickly fall apart. Will the trust she has in her friends be enough to see her through? And how can she confront the darkness when she sees it in her own reflection?

What readers are saying on Amazon

"Surprisingly good stuff!"
"All together a must read."

The door flung open, slamming against the side of the strange carriage and an inky black mist drifted from within, snaking its way along the ground. All at once, the memory of seeing a similar smoke in her own home raced through her mind and her hand flew to her injured shoulder. Her breath came in ragged gasps and her heart began to pound in her chest.

“It can’t be!” she gasped, her voice barely a whisper. “The witch is dead!”

Everything had gone deathly silent. The entire city seemed to be holding its breath, waiting to see what would happen next. Karina, at last, could not contain herself any longer. She leapt to her feet and threw herself against the balcony rail. Pointing one trembling finger at the ground, she shrieked, “It’s her!”
There was a flash of lightning and in the brief light she saw a tall and shadowy figure standing among the trees. It vanished with the light, but its afterimage flickered before her eyes. In that moment, she lost all control and screamed at the rain. “Stop it! Stop it! Please! Just stop it!”

Her voice was still echoing through the darkness when the wind and rain suddenly stopped. The stillness that followed was almost worse than the rain, leaving her in an eerie silence. For a moment she just sat there, panting heavily and listening to the deafening quiet. She didn’t know if the thing that had called her was still out there or not, or if it was real or not, but she had to be sure. It didn’t matter how scared she was, she had to protect herself. And little Toto.

Drawing her sword, she pulled herself to shaking feet and called out into the night. “Ho there!” she shouted, her voice trembling more than she had hoped. “Ho there! I have a sword!”

There was no answer. She swung her blade back and forth at nothing and squinted uselessly into the black. At last, she turned around to look over the back of the fallen tree, into the place the storm had come from.

She realized then that she should have kept on screaming.
Without a word being spoken, the entire company picked up and began moving. The half-human carelessly tossed Thomas at Dorothy hard enough that he let out a little squeak when he landed in her lap and she very nearly laid into the beast right then. It was all she could do to focus her attention on her brother instead.

“Are you all right?” she rasped as she drew Thomas near. There was no time for a reply. One of the Bewitched pulled her to her feet and threw a rope around her neck. She was made to walk ahead as he watched over her through glazed eyes.

Over his shoulder was her bandolier of empty vials and wooden daggers. It was only half a plan, but it came to her in a flash in that very moment. She wasn’t sure when it would start, but it would end when she drove one of those daggers through that half-human’s heart. No matter what happened later on, she was going to kill it for what it had done to her brother.
Powered by